How's that for a title? A disturbing thought crossed my mind last night as I drove home from my friend Keri's house.

On the side of the road an owl had met its demise, presumably it lost its life to an oncoming car or truck. I suspect it was a barn owl, but couldn't look closely as I whizzed by at 50 mph. One thing I did notice, though, was that some of its beautiful (wing? tail?) feathers were standing straight up. For a split second I thought, "I should stop and pluck those out." But I didn't.

Maui has two types of owls, the pueo or Hawaiian owl, which is endemic to Hawaii, and the barn owl. You can read more about the pueo here. The pueo has mystical properties to native Hawaiians, some who consider it to be their 'aumakua or personal family guardian. It is considered to be good luck to see an owl fly overhead as you travel, and I often get chicken skin (goosebumps) when I see them in the early dusk hours. But I digress...

My impulse to pluck the feathers was fueled by thoughts of using them in a quilt or other fiberart piece but, as beautiful as they were, it seemed sacrilege to do so. Plus, I am superstitious about some things and I don't need any bad luck raining down on my head. On the flip side, however, it seemed a shame to have them go to waste on the road side.

Here are several pictures in progress of the giant dahlia pattern I started at Quilt Hawaii last summer. It was a template class with Marti Michell and was GREAT! I don't do much traditional piecing and the rotary cutting templates made it a breeze to cut out. 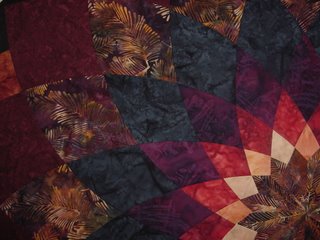 It's all in batiks and I fussy cut the feathered print for the center and one of the outside petals. Here's a better view of the feather print: 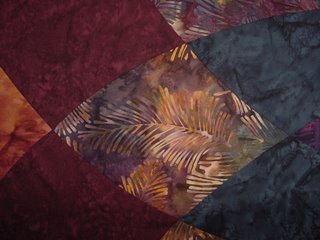 Here's a shot of the whole piece in progress. Last night I was able to finish one more quarter, so it's 3/4ths done. But wouldn't you know, I ran out of the burgundy batik (toward the outside). I found another piece of it, but I'm still 4 pieces short. I'm not sure if I'll be able to find it since it's over a year old, but we'll see. 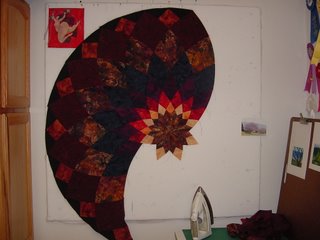 Lastly, here's a view of the center star. It lies fairly flat and it came out near perfect at the center. 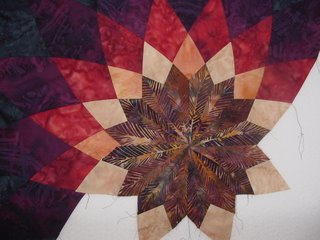 I'm thinking I might set it on the rust color (at the outside, pieced with the black) for the background, but I haven't decided yet. It will be 104" square when finished.
Posted by Unknown at 4/28/2006 No comments: 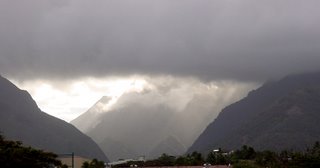 This was the view of Iao (pronounced ee-au - "au" like OW! (ouch)) Valley as I was leaving work tonight. The picture doesn't do justice to the color and light, but you get the idea. It's such a pretty view. I'll have to post a daytime shot so you can see how green everything is from all the rain we've had this winter.
Posted by Unknown at 4/27/2006 1 comment: 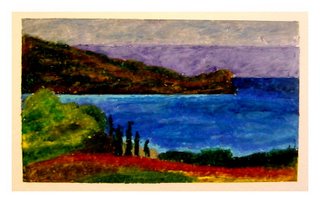 I took an oil pastel landscape class on Saturday at the Hui, and this was one of my projects! It's the view of West Maui/Molokai from the Hui. This was my second official "drawing" class and I just loved it! Oil pastels are fun - kind of like coloring with crayons, but better since they blend so nicely. I have one more session next Saturday - I wonder what we'll do next?

There are six of us in the class - all ladies - and one of the students is an oil painter whose work I really admire, Kari McCarthy. She does fabulous landscape paintings with clouds and skies that are so realistic you can almost feel the mist!
Posted by Unknown at 4/24/2006 2 comments: 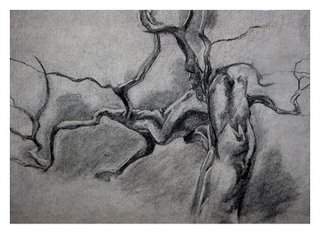 It's been awhile since we finished the class, but here's a picture of the last project. This is actually an attempt to recreate one of the instructor's AMAZING works - with his permission, of course. You can see Kit's picture here (click on the word "here" to go to his site). His drawing is incredible in person, with gentle placement of color with pastels, accents with conte crayon, etc.

This was a very difficult assignment - you're looking at 6 hours of work, with lots to go. I don't think I'll finish this piece, but I'll certainly do more tree drawings in the future.
Posted by Unknown at 4/24/2006 2 comments: 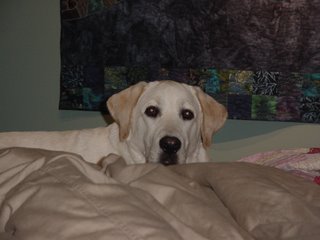 We keep having mixed feelings about letting Cody up on the bed. He's so cute and sweet, but can sometimes get too rambunctious. At 80+ lbs, that's way too much dog to wrestle!

He still hasn't stopped his mouthing, either, and his teeth are sharp! We're thinking of getting a shock collar, but don't really want to go to that extreme. Anyone have any hints?
Posted by Unknown at 4/24/2006 No comments: 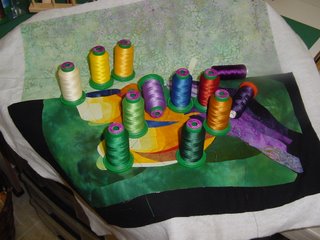 This is one of my recent projects, which is already done. The nice thing is that it is obscured so you can't really see it. I sent this quilt off to Fiber Hawaii for their all-fiber juried exhibit. Jurying is this coming Sunday. I'm keeping my fingers crossed. I sent Night Light, too, so we'll see what happens!

I couldn't believe I had all the right colors of thread! Isn't it nice when everything works out?
Posted by Unknown at 4/24/2006 No comments:

I've said it before and I'll say it again: I've always associated Satin Stitch with baby quilts. You know the type...those with appliques so stiff the quilt almost stands up by itself, and dense, smooth satin stitch around the edges (usually 1/4" wide).

Now I'll admit, I've become a SS convert in recent years, but I don't think the SS on my quilts can be defined by the mental picture above. But what else can you call it? Well, today on Sonji's blog, she refers to it as "super zig zag." I love it! Sonji, I hope you don't mind me using your phrase, because it says it so well.

Thanks to Rayna, I'm the proud owner of this American Beauty iron! She posted awhile back that she had purchased one, and I fell in love with it. Red is one of my favorite colors, and who could resist that gorgeous Lucite handle? Plus, it's good to have a flat-surface iron for pressing certain things. It works, though the cord may need to be repaired, but Bruce can fix that for me. Yeah!
Posted by Unknown at 4/21/2006 No comments:

Thought for the Day

As soon as I get better. I've been fighting a bad cold and woke up this morning with the glands in my neck so swollen I could barely swallow! I was just certain I had some rare disease (from watching too much "House, M.D." no doubt). They're already going down thanks, in part, to my Jamba Cold Buster smoothie.

On top of all that, I was holding a hoof for Cody to chew on and he crunched down on my thumb nail, right at the nail bed, so I have a bleeding, sore thumb today.

Have you every heard such a downright plea for sympathy?? 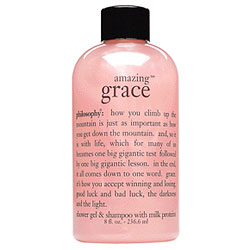 I got a sample of this body wash/shampoo with my last order from Sephora and it is heavenly! I didn't use it on my hair, but it was fabulous as a body wash. It has a soft, feminine scent - not too babyish yet not too sophisticated. I smell yummy if I do say so myself!

The older (ahem) I get, the more sensitive my sense of smell seems to get. I am turned off (and sometimes made ill) by most strong scents, so I appreciate these soft, yet lingering, ones. And its pretty to boot!
Posted by Unknown at 4/04/2006 1 comment:

Other Stuff About Me

Never be afraid of being generous. It pays off in spades. -- Melody Johnson

Wine is sunlight held together by water. -- Galileo


Self-doubt can be an ally. This is because it serves as an indicator of aspiration. It reflects love, love of something we dream of doing, and desire, desire to do it. If you find yourself asking yourself (and your friends), "Am I really a writer? Am I really an artist?" chances are you are. The counterfeit innovator is wildly self-confident. The real one is scared to death. -- Steven Pressfield, from "The War of Art."

I think every artist who succeeds (in their own terms) has some ability to keep moving forward in the face of constant obstacles...emotional, mental, financial, physical...and that is what sets them apart from all the others who have tried and quit. This is also what sets them apart from those who always talk about trying or starting but never get beyond the talking stage. -- Nancy Crow, from "Nancy Crow."

The biggest thing separating people from their artistic ambitions is not a lack of talent. It's the lack of a deadline. Give someone an enormous task, a supportive community, and a friendly-yet-firm due date, and miracles will happen. -- Chris Baty, from "No Plot, No Problem."